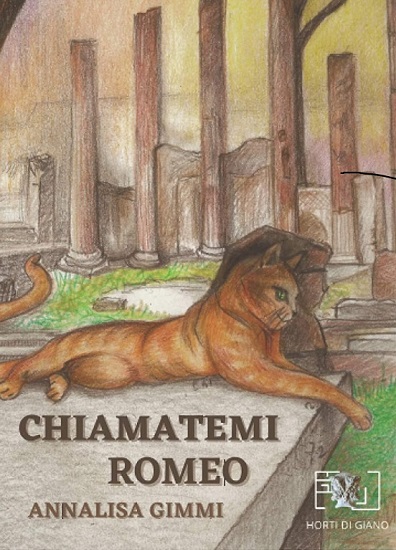 Rome and her cats: an inseparable pair, so much so that the four-legged ones have been declared by the Municipality as a bio-cultural heritage of the city.
Certainly there were cats when the senators walked in the Forum, there were during the Middle Ages and in the Renaissance they ran silently and velvety between the palaces of papal Rome. And so on, up to the present day when the presence of cats still lights the most hidden yet full of life corners.
And this tells Call me Romeo, a novel divided into episodes, each set in a different historical period.

Meanwhile, the title, winking with a smile at the famous incipit of Melville’s Moby Dick, places the Cat among the wandering characters who have populated and populate the world. Witnesses and occasional actors of a Story that takes place even without them, but that always flows alongside them and of which they are inevitably part.
The 18 scenes tell as many episodes that have made the history of the City, from the Ides of March to the present day. Characters of the past, such as Julius Caesar, Eliogabalo, Michelangelo, Mozart, up to Audrey Hepburn and others of recent times, are told in the moments of the encounter with a Roman cat, and are mixed with fictional figures who, however, could really have trodden the streets of the Capital. And next to them, the cats. Or rather the Cat, because the narrating voice is a cat that crosses time and tells what she sees and who she meets.
It all starts and ends in Largo di Torre Argentina, but let’s not forget that every corner, every neighborhood, every street has its colonies, and its gattare who dedicate their time and their love to feed and look after cats.
An anomalous, light story of Rome, seen even in its most tragic moments but always with the softness that only cats can give, when they walk with their paws as light as feathers on the old cobblestones of the streets.
A story that can please cat lovers, but also those who want to retrace moments of history in an original way, and for those who love Rome which appears as the true protagonist of the novel. Finally, also suitable for young and very young readers who will be accompanied on a journey through time by exceptional mustachioed guides.
The book has been on sale on Amazon .
50% of the copyrights will be donated to the feline sanctuary of Torre Argentina and the remaining 50% to associations that treat street cats in the author’s city.

This website uses cookies to improve your experience while you navigate through the website. Out of these, the cookies that are categorized as necessary are stored on your browser as they are essential for the working of basic functionalities of the website. We also use third-party cookies that help us analyze and understand how you use this website. These cookies will be stored in your browser only with your consent. You also have the option to opt-out of these cookies. But opting out of some of these cookies may affect your browsing experience.
Necessary Always Enabled
Necessary cookies are absolutely essential for the website to function properly. This category only includes cookies that ensures basic functionalities and security features of the website. These cookies do not store any personal information.
Non-necessary
Any cookies that may not be particularly necessary for the website to function and is used specifically to collect user personal data via analytics, ads, other embedded contents are termed as non-necessary cookies. It is mandatory to procure user consent prior to running these cookies on your website.
SAVE & ACCEPT