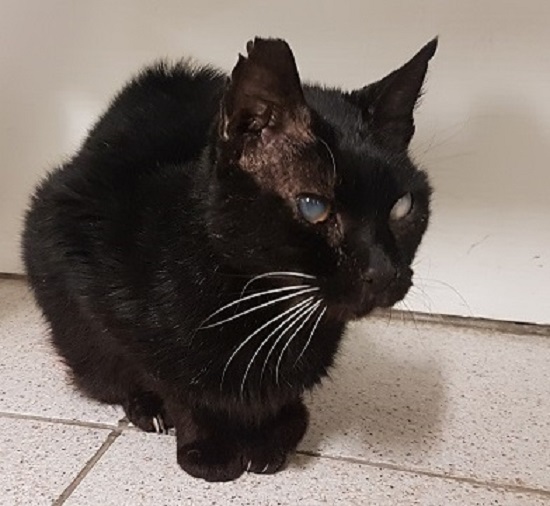 Cats in desperate situations arrive at TA from shelters around Rome.  Dreyfus is one of those cases.  He comes from the sea, he’s FIV positive and with a rhinotracheitis that made him blind.  He needed too much care for the small shelter in Anzio.  Our doors at Torre Argentina are open for those who, like him, deserve an adoption at a distance! 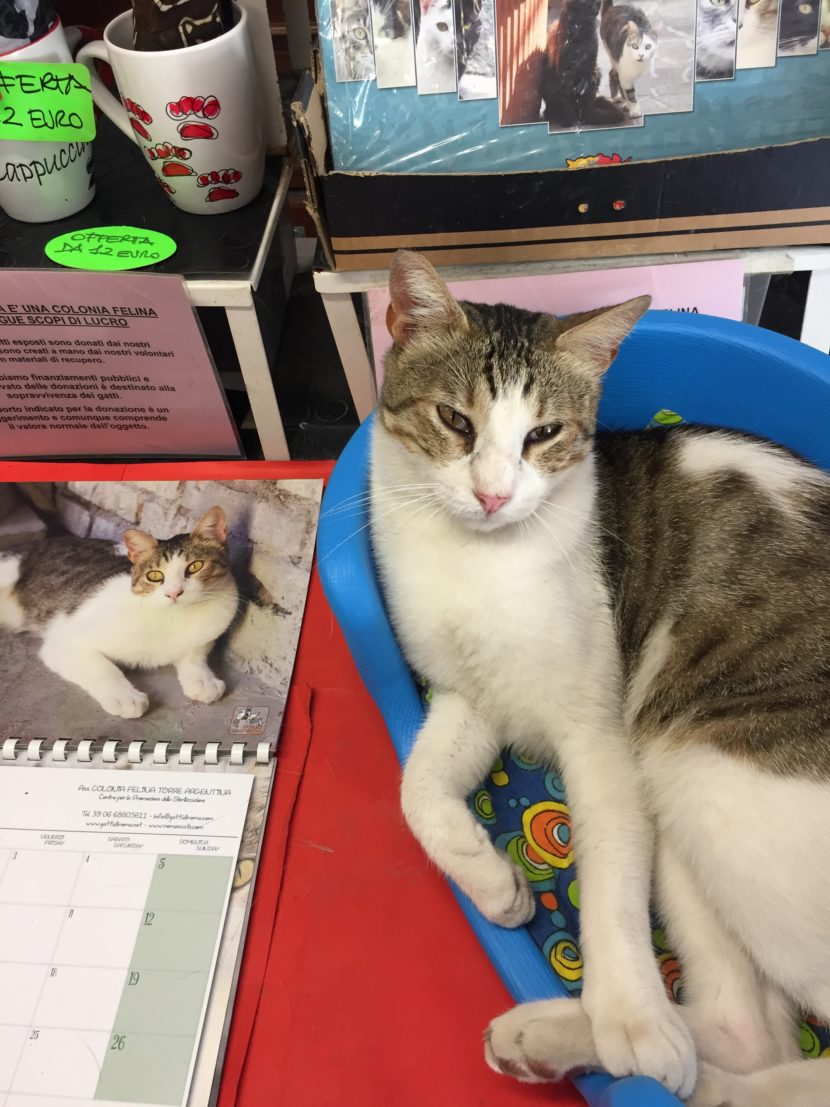 Rubio appeared among the ruins in the spring of 2015.
He was a beautiful, healthy young cat, with golden almond eyes and a mild character, and we thought it would be adopted immediately.
It has not been so, the years have passed and Rubio is still among us.
He would need a little luck … maybe distance adoption could bring it to him! 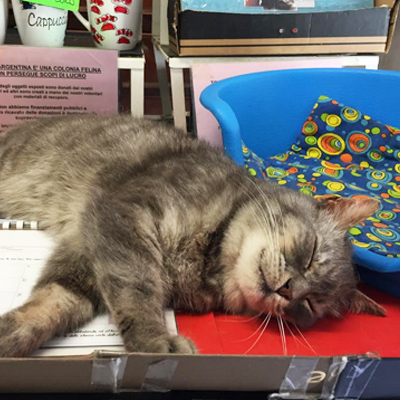 Pioppo has only three legs, but he does not know it!
So he runs, he jumps and climbs walls as if he had five legs. And when he is tired of so much trouble, he offers belly, throat and all of himself to caresses. 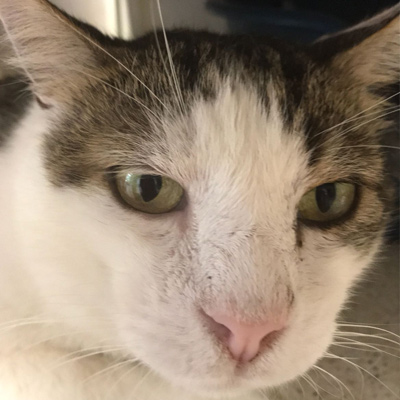 Zenone is a good and sweet cat with a serious vice: he hates dogs! He hates dogs so much that in his old colony he did not hesitate to attack every dog he saw, no matter the size or disposition. Unfortunately he found the dog that removed this crazed cat from his neck with a bite that broke his leg so badly that it had to be amputated. Now Zenone is a tripod of Torre Argentina! 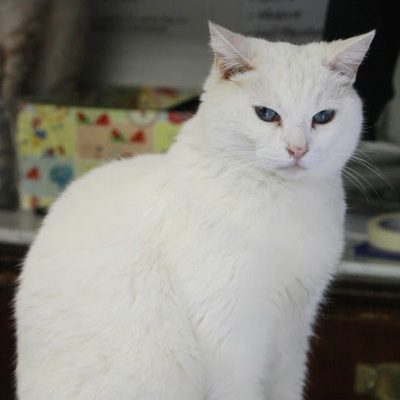 As beautiful as she is unpredictable, Trilly has had many offers to adopt her retracted because of her overly nervous character. Here at Torre Argentina she prefers the male volunteers to the ladies. Who will convince her not to discriminate? 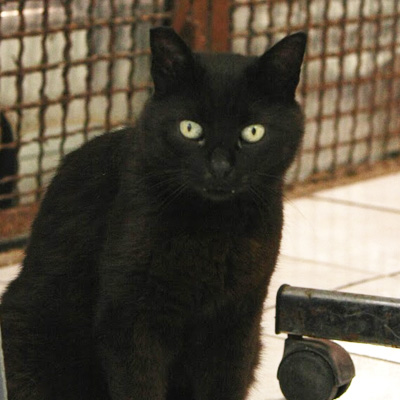 As the large scar on his back shows, Tarek is a not so young, handsome black cat that has had a hard life. But he is doing very well here at the shelter. He is such a charmer that during the times he decides to disappear into the Sacred Area ruins, all the volunteers immediately miss him and worry! 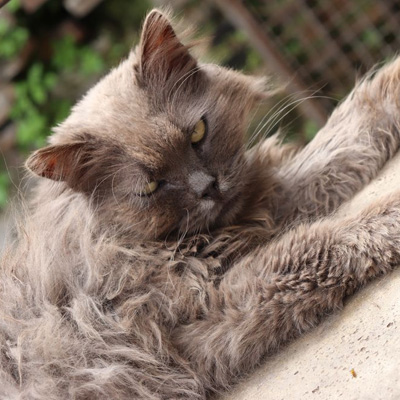 Porthos is a beautiful cat with long gray fur, who loves to welcome visitors at the top of the stairs of the shelter or directly on the threshold – making everyone step over him. Unfortunately he does not like being brushed, so at times his hair knots tightly into dreadlocks making him the first Rasta cat of Torre Argentina! 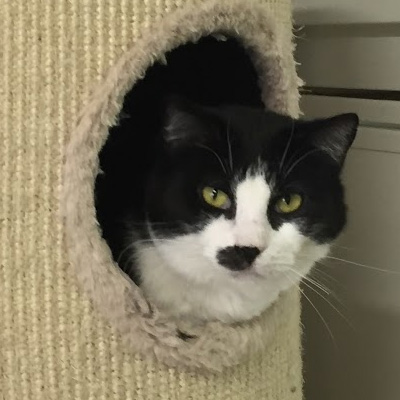 Paoletto is a free spirit! Because he is lame, we thought we should protect him by keeping him in the nursery. But he managed to escape and now runs happily in the ruins of the Sacred Area, climbing everywhere and sleeping on the scaffolding! He worries us, but we see that he is happy to return to the shelter for food and petting, then a quick nap and he is off to the next adventure 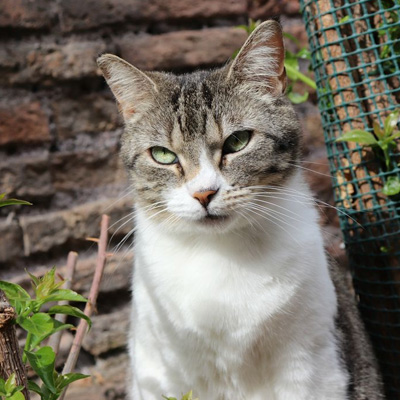 Genziana is a beauty:  beautiful with a wicked character! She could be a cat-model. They say she has the same temperament as Naomi Campbell … very hot-tempered! 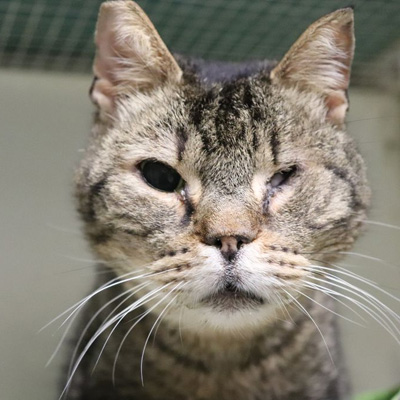 Brutus is deaf, blind, FIV positive and has kidney failure … a real wreck when it comes to his health! But he is happy all the same, with his friends Grumpy and Calibano, and happy to accept cuddling and petting… and distance sponsorships of course!